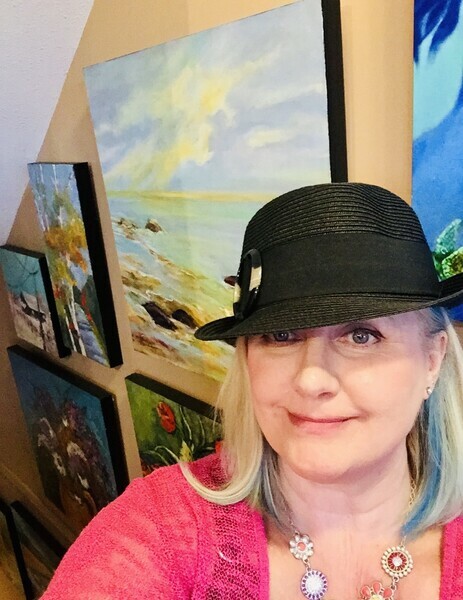 Gabrielle Strauss’s engaging work invites viewers into her rich images and draws the audience into their dance of colour, light and form.

Born in Austria near Vienna, the artistic and intellectual legacy of that land shaped her childhood.  Gabrielle became involved in various art groups after moving to Vancouver, Canada. After re-establishing herself in this new country, she was finally able to pursue her life-long dream of an artistic career.

Her early formal training in oil and other mediums provided a solid foundation for further development. Studying the techniques of her mentor Robert Genn, and other established Canadian artists, Gabrielle began developing a looser and freer style.  Her curiosity now leads her to explore many techniques and methods, all of which percolate through her vast body of work. For Gabrielle, the process of creativity is an adventure in states of joy.

As an active member of the Federation of Canadian Artists , Fraser Valley Chapter , the Langley Arts Council and the Fort Langley Artists Group, she has exhibited in over 50 group and solo exhibitions and has been accepted into numerous juried shows. Her work has devoted followers and collectors throughout Canada and Europe and the United States.

My paintings are created with the intention of inviting the viewer to join in my adventure.   I express my urge to dig in and create with great excitement through my love of art.

I now work predominantly in acrylics.  The speed of execution coupled with my commitment to bold, vibrant colours and textures allows me to physically keep pace with my lively internal dialogue.

I am thrilled when people study my work and see things in it that I wasn't conscious of while creating it.  My paintings reveal and explore mood, emotion, and my colourful mindset.  Having grown up on the shy side, I find that painting allows me to share my lively, explorative side with others more easily.

Much of my work brims with whimsy and flair, from my quirky critters through my wonky houses to trees dancing in their Fall colours.  I love making people laugh and exercising my own sense of humour.

Thank you for viewing my art.

"Paint as you like and die happy"  Anthony Hopkins

2020 Behind the Scenes Langley Arts Council